View source
watch 01:36
We're Getting Mutants in the MCU - The Loop
Do you like this video?
Play Sound

Christmas Couple (nameless, but officially referred to as "Boyfriend-kun and Girlfriend-chan") are recurring characters that appear sporadically throughout both seasons of Osomatsu-san.

These characters are a glimpse at normal people in the sextuplets' world, who unlike them, show clear signs of progression in their states and relationship.

They sometimes also appear as background characters in Hesokuri Wars, whenever the artists wish to re-use memorable character designs for any battle stages and scenery.

The girl has short brown hair and wears a winter coat, while the boy wears glasses, along with a winter coat and muffler.

In Osomatsu-san in the Summer, the girl is wearing a pink maternity dress while the boy wears a white work shirt and general summer clothing.

Both are rather average and are more or less significant bystanders that come into contact with a certain sextuplet during their season 1 appearances.

They debut in the second segment, where Ichimatsu Matsuno is sitting at the same bench with them and asking about their plans after the date is over, while glaring at them them. While they calmly attempt to make conversation with him, he later bursts into flames out of anger and jealousy and scares them away.

They reappear when Ichimatsu is seen starving on the streets after leaving home. They pull him up from the ground are shown to be concerned, but the three people ultimately go their separate ways.

After some time into season 2, the couple appear again in a brief cameo where it is revealed that the two got married and the girl is pregnant. They are taking a stroll when Karamatsu Matsuno interrupts, and tries to impress them under his alias of Summer Kamen. 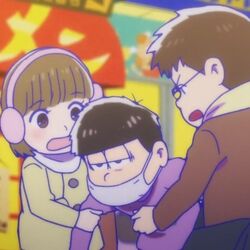 The couple lifting Ichimatsu as he struggling his own life outside.

Christmas Couple appear in Episode 30. The girl revealed that she is pregnant.

The couple interrupted by Karamatsu under the alias Summer Kamen.

Karamatsu under alias Summer Kamen impress them for coming out, despite the weather is extremely hostile.
Community content is available under CC-BY-SA unless otherwise noted.
Advertisement